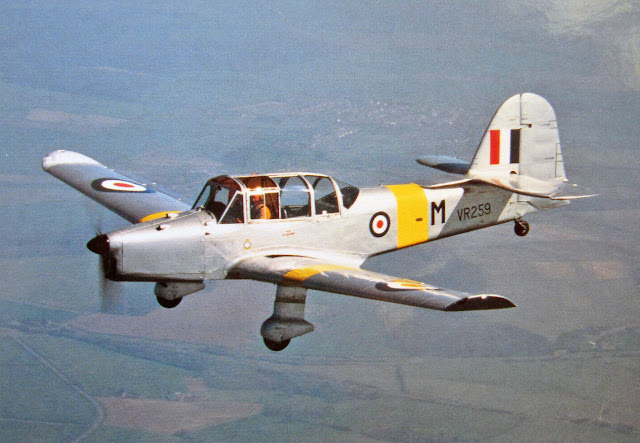 This is a Percival Prentice aeroplane as used by the Royal Air Force.  I don't really know much more than that.  If you can add more information about this plane, please add a comment!
Posted by Dianne at 2:05 PM No comments:

Arthur Morgan Prentiss was born in 1864 in New York. He was the son of Henry James Prentiss and Henrietta Prentiss.  He was married to Lucy Warren Prentice (maiden surname currently unknown).  They do not appear to have had any children.

Henry James Prentiss was married to Lou Bradley and they had five children who were:

He was a commercial photographer.  This is the only photograph I have seen taken by Albert Morgan Prentiss but there are bound to be others. 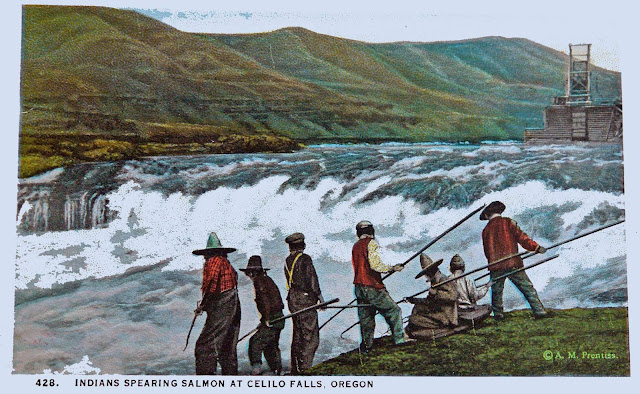 Does anybody else currently know anything else about Arthur Morgan Prentiss? or Celilo Falls?  He is new to me!  I will update as I find more!
Posted by Dianne at 6:58 PM No comments:

A little break that turned into a long break ..

As you can see I have had a break, which was much longer than I intended, but I have now brushed myself down and hope that I will be able to bring you some new information about the Prentice clans over the coming weeks and months.

While I have been on my little break I haven't been totally idle but have been collectiong data on various Prentice doctors and military men.

If there are any Prentice people that you particulary want to find and are having difficulties locating, drop me a line, I can't guarantee that I will be able to find them but I will certainly try ..
Posted by Dianne at 4:36 PM No comments: 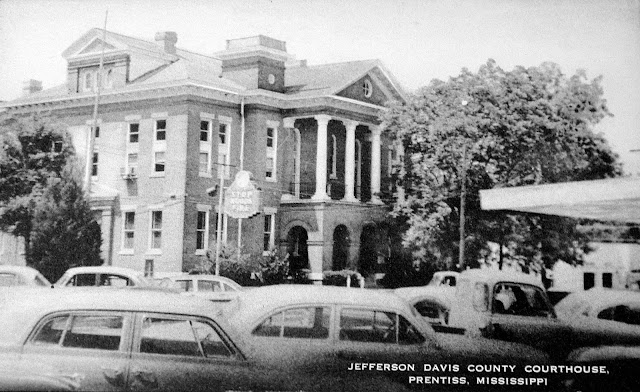 It is thought that the town of Prentiss may be named after Seargent Smith Prentiss, who was a member of the Mississippi House of representatives or possibly Prentiss Webb Berry, a local land owner.
Posted by Dianne at 8:57 PM No comments:

During the 1851 census of Scotland, Archibald Prentice was living at Whitburn with his parents William and Christina Prentice (nee Dymock).  His father was employed as a farm labourer and his siblings were:
Archibald married Jane Ann Russell on the 19th July 1876 at the St Nicholas Church, Union Street, Aberdeen.  Their children were:

Posted by Dianne at 2:08 PM No comments:

Alexander was the son of the Rev. Arichibald Prentice and Jane Ann Russell.

James enlisted for the duration of the war in London.

On the night of the 1901 census of Scotland, Alexander was living at the Newbraighall Manse, Brunstane Road,Duddingston, near Edinburgh in the Scottish county of Midlothian.  Alexander's elder brother William David Russell Prentice was a living-in pupil at Fettes College, Edinburgh. Midlothian, Scotland.  Alexander was living with his mother and father Archibald and Jane Anne Prentice, his sister MaryGlasgow Dymock Prentice aged nine and his brothers William David Russell Prentice and Archibald Hepburn Gardiner Prentice aged twenty three and twenty.

James emmigrated to South Africa in 1905.  He resided at the Johannesberg Golf Club in South Africa.

James arrived at Plymouth, Devonshire, England from Capetown, South Africa on the 26th Aug 1914, on the Kildonan Castle (s ship of the Union Castle line).  His occupation was given as secretary.

James was a Lance Corporal in the 'B' Squadron, 3rd Dragoon Guards (Prince of Wales Own) Regiment.

He entered the French theatre of war for the first time on the 4th Dec 1914.

James was injured at Ypres and would have been passed through the medical chain of evacuation, untill he reached one of the Hospitals at Boulogne-sur-Mer, Pas de Calais, France.

James died of woulds recieved at Ypres on the 6th Jun 1915 and was buried at Boulogne Eastern Cemetery.

Boulogne, was one of the three base ports that were used extensively by Commonwealth armies on the Western Front throughout the First World War. There were extensive medical facilities available in Boulogne.

William Prentis was the son of William and Sarah Prentis.

He was their first born child and was born c 1699 in Dukes Place, St. James, London.  His mother Sarah died c. 1708 in London when William was nine years of age.

William emigrated to the Americas and arrived in Williamsburg in the early 1700's..

This is a photo postcard of the Prentis house. 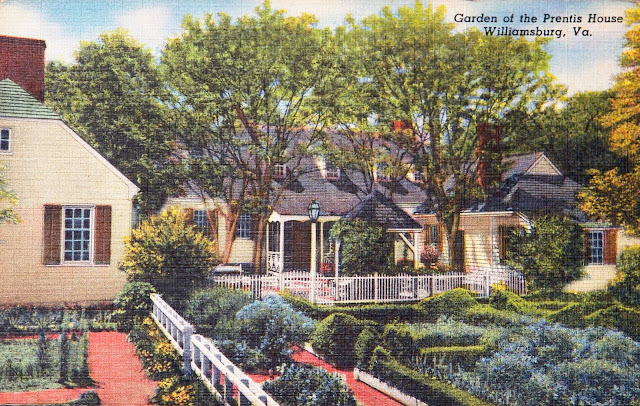 This is a photo postcard of the Prentis house gardens in Williamsburg, Virginia, U.S.A.  It would appear to be a fairly modern photograph with relatively modern buildings, although there was a much earlier Prentis House at this location. 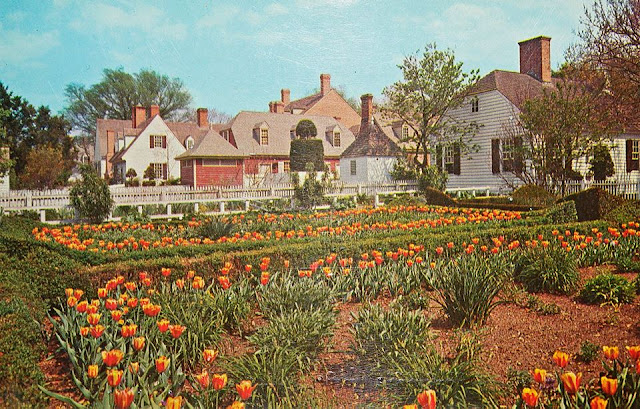 In the book, The Gardens of Colonial Williamsburg, the authors describe the origins of the earliest Prentis House in Williamsburg.

''The Prentis House at the north-east corner of Duke of Gloucester and Botetcourt Streets was the home of the family of a prosperous and influential merchant.  Early York County records show that the property was purchased in 1712 by John Brooke from the Williamsburg trustees.  In 1725 he sold the house to his son-in-law William Prentis.  Although William Prentis was the orphaned son of a London baker, research concludes that he recieved a thorough grounding in book-keeping, accounting and penmanship at Christ's Hospital in London, before being apprenticed to Archibald Blair of Williamsburg.

William Prentis and his wife Mary Brooke had six children, they were Daniel, Elizabeth, William, John, Sarah and Joseph.

One of his grandsons, John B Prentice was a well-known slave-trader.

As per previous posts, if you know anything about this house or William Prentis could you drop me a line, thank you :)

If you are related to any of the people I write about or have any further information and can verify or correct anything I have written, please contact me or leave a comment